In the Department of Nutrition and Metabolic Medicine, we are conducting a research based on the keywords of nutrition and metabolism. Human bodies are comprised of what they eat. As such, meals and nutrition play important roles in human health. Moreover, in recent years, a growing body of evidence is accumulating to demonstrate that meals affect human health via gut microbiota. The research group engages in research of the relationship between nutrition, the intestinal environment and health using the birth cohort studies conducted by the Center. Because birth cohort study starts with the mother during pregnancy, it also enables the analysis of influence during the fetal period. The “Developmental Origins of Health and Disease” (DOHaD) theory, which indicates that prenatal and perinatal exposure to environmental factors affects the development of human diseases in adulthood, has also been gathering attention. As such, it is necessary to research factors affecting human health and diseases through a person’s life course. This perspective indicates the importance of results obtained through birth cohort study, and it is our belief that those results can contribute to people’s health. Additionally, the role played by nutrition in clinical situations is considerable as well. For that reason, this research group also engages in research that covers clinical nutrition. 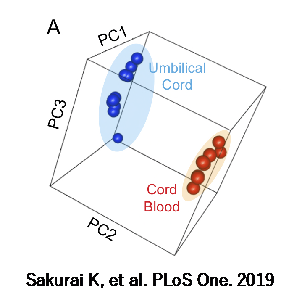 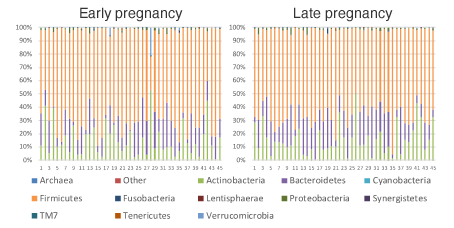 Through the “Developmental Origins of Health and Disease” (DOHaD) theory, which has been attracting increasing attention, it has been shown that environmental factors during pregnancy considerably influence the health of children after they are born. A conceivable mechanism behind this phenomenon is epigenetic change. This research group pursues research while focusing on DNA methylation, a form of epigenetic change. The umbilical cord is comprised of solely fetal cells, and as such is thought to be tissue that reflects the influence of environmental factors received by the fetus. Furthermore, this tissue can be obtained after delivery noninvasively. Given that, this research group uses that umbilical cord to examine the link between the mother’s condition during pregnancy and DNA methylation.

It has been reported that the nutritional environment of mothers during pregnancy is associated with the DNA methylation of the H19 gene. Reports on epidemiological surveys have also cited that the same environment has a link to obesity in children. As it is known that the H19 gene expresses in adipocytes, this research group pursues the research of the link between the DNA methylation of the H19 gene and the functions of adipocytes from the standpoint of the DOHaD theory.

DNA methylation of the H19 gene in the umbilical cord 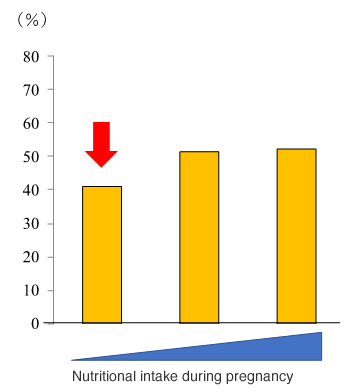 This research group engages in research on clinical nutrition science in cooperation with the Department of Clinical Nutrition at Chiba University Hospital. Currently, we are pursuing research on the effects that the nutritional state of people prior to chemotherapy have on the discontinuation of that therapy. We obtained fascinating findings in our pilot research, and intend to examine this theme in greater detail going forward. Recently, the concept of quaternary prevention in medicine is being advocated, with people’s nutritional state believed to play a crucial role in that concept as well. On the clinical frontlines, nutrition is a key factor that sways the outcome of treatment. This research group engages in research with a perspective steeped in nutritional therapy science that supports treatment from the aspects of quaternary prevention and nutrition.